According to federal reports, Camp Lejeune’s water may have been contaminated by these harmful chemicals for as long as 60 years. The toxic drinking water endangered Marine and Navy personnel, civilian workers, and their families.

Since the late 1980s, the Agency for Toxic Substances and Disease Registry (ATSDR) has been evaluating the health risks from Camp Lejeune’s water.

According to ATSDR’s research and numerous other studies, people who lived or worked on the base during this time are at risk for developing cancer, congenital disorders (also known as birth defects), and other serious health conditions.

With people sick and dying from unexplainable conditions, victims and their loved ones have been left wondering what happened at Camp Lejeune.

The short answer is that the federal government, the United States military, and a privately owned dry cleaner contaminated the groundwater near Tarawa Terrace and Hadnot Point with dangerous chemicals.

The toxic chemicals seeped into the groundwater from the following sources:

How the Contaminated Water Was Mixed Into the Clean Water Supply

The two water-supply wells collected the contaminated groundwater and pumped it into a treatment plant. Since the military cycled the eight wells at Camp Lejeune (alternating from one well to another), only a few would pump water at any given time.

Because of this cycling, the concentrations of contamination varied during the decades-long period. Alarmingly, ATSDR’s research found that both short- and long-term exposure to the chemicals in Camp Lejeune’s water increase the risk of health conditions.

Therefore, those at greatest risk are people who lived or worked at Camp Lejeune for at least 30 days between 1953 and 1987.

Who Are the Victims of Camp Lejeune Water Contamination?

Sadly, those living in the residential areas served by these two water systems were mainly enlisted families and unmarried service personnel. Many of the nearly 1 million people exposed were military veterans and their young families – including infants and children – and those of reproductive age.

Likely victims of Camp Lejeune water contamination may include: 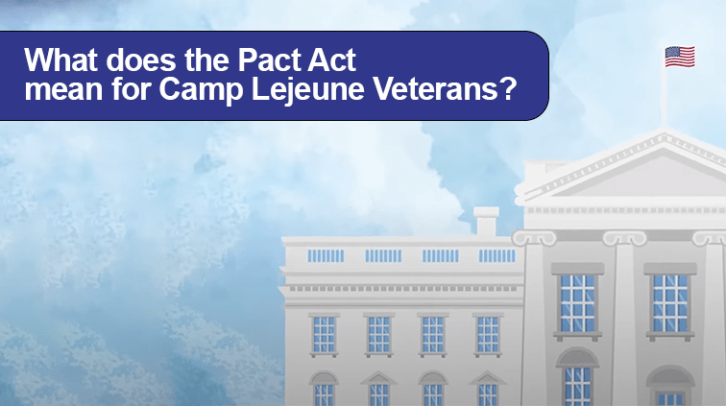 Learn what the recently signed PACT ACT means for veterans and their loved ones stationed at Camp Lejeune between 1953 and 1987. View Transcript.

Camp Lejeune 101: What the PACT ACT means for Camp Lejeune 101 veterans. On August 10th, 2022, United States President Joe Biden signed the PACT ACT, a bill that offers the most significant increase in critical healthcare and disability benefits to millions of veterans in their families in more than three decades, but what does this bill specifically mean for veterans who are stationed at Camp Lejeune?

Between 1953 and 1987, nearby businesses were dumping hazardous chemicals that made their way into the Camp Lejeune water supply systems. The water contained toxins, such as benzene, perchloroethylene, trichloroethylene, and vinyl chloride, chemicals that can cause cancer, infertility, miscarriages, and other illnesses. Residents and staff were repeatedly exposed to the site’s tap water system, including drinking and bathing in the water.
The PACT Act includes the Camp Lejeune Justice Act, a bipartisan bill that allows veterans and their families who were exposed to the water contamination at Camp Lejeune to file lawsuits and recover compensation for the harm done. If you or your loved ones were exposed to the toxic drinking water at Camp Lejeune, you may be entitled to financial compensation. The Camp Lejeune Claim Center has been helping veterans and their families pursue compensation for their injuries. Call (866)-473-4764 today to request a free case review and see how we can help you to.

For decades, most harmed by Camp Lejeune’s contaminated water have had no legal options.

The federal government is usually protected from being sued by veterans for injuries related to their military service. As a result, victims were referred to the U.S. Department of Veterans Affairs (VA) to seek disability benefits, which were often insufficient. Many were even denied claims for their injuries.

Thankfully, the time has come for the victims of Camp Lejeune to get justice. The Camp Lejeune Justice Act of 2022 passed through Congress and was signed into law in August of 2022. This law allows victims to pursue financial compensation through a Camp Lejeune lawsuit, no matter how far back their exposure occurred.

According to ATSDR, the drinking water at Camp Lejeune was contaminated from the 1950s through the 1980s. Anyone who lived or worked on the base during this time may have been exposed.

Since families lived on the base, this included pregnant women, infants, and children. Sadly, anyone born up until the mid-1980s could be at risk if they or their parents were exposed to Camp Lejeune’s contaminated water.

Fortunately, the Camp Lejeune Justice Act could allow eligible victims to pursue a claim, no matter how long ago they were exposed.

Camp Lejeune water contamination risk factors are unfortunately not easy to predict. Marines at Camp Lejeune from 1975 to 1985 may be at higher risk due to the water they drink during training.

“A marine in training under warm weather conditions could drink between one and two quarts of water per hour. Combining this ingestion rate with dermal and inhalation exposures from showering twice a day, a marine could consume a liter-equivalent of up to eight liters of drinking water per day.” – Centers for Disease Control and Prevention (CDC)

Another important risk factor is how the toxic water exposure occurred, including:

Sadly, some studies suggest pregnant women and young children were at the highest risk for illness.

If you or a loved one has experienced health issues or illnesses that could be linked to Camp Lejeune, speak with a Camp Lejeune water lawyer now to discuss your risk factors and legal options.

Camp Lejeune water contamination is believed to be caused by VOCs released into the groundwater and pumped into the base through the Tarawa Terrace and Hadnot Point wells.

The origin of Hadnot Point’s contamination is believed more complicated since there were multiple sources and chemicals involved. It is believed that TCE is the main contaminant, but other chemicals were also present, especially from 1953 to 1985. Hadnot Point’s water supply is thought to have been far more contaminated than Tarawa Terrace’s.

Even if you’re unsure where you or your loved one was living or working at Camp Lejeune, don’t hesitate to contact us. Our skilled Camp Lejeune water attorneys can listen to your story and may be able to help you pursue compensation for injuries.

While the specific symptoms vary depending on the illness, behavioral changes and cognitive impairment are among the potential early warning signs indicating exposure to contaminated Camp Lejeune water.

Talking with your doctor if you have any of these symptoms is important, as they can be signs of more serious conditions.

Research shows that people who lived or worked at Camp Lejeune when the water was contaminated are at greater risk for developing several health conditions.

Additionally, babies whose mothers were exposed to Camp Lejeune water during pregnancy were at a greater risk for certain birth defects, leukemia, and neural tube defects.

“Marines have complained they and their children suffered cancer, including breast cancer and fatal leukemia, because of the contamination.” – NBC News

If you or a loved one developed a health condition after living or working at Camp Lejeune, new laws may soon allow you to file a legal claim. Find out if you’re eligible today.

According to reports released by the CDC, people stationed at Camp Lejeune when the water was actively contaminated are more likely to die from certain cancers or Lou Gehrig’s disease.

Camp Lejeune Marines were found to have the following increased risks:

If you or a loved one contracted a deadly disease after being exposed to the contaminated water at Camp Lejeune, contact the Camp Lejeune Claims Center without delay. Even if your loved one passed away decades ago, you may still be eligible to file a Camp Lejeune lawsuit on their behalf.

Camp Lejeune water survivors have been fighting for decades to get justice. After the tireless efforts of victims, family members, and advocates, the time may finally be here.

Even if you have tried in the past to seek justice for health conditions or your loved one’s death, it is not too late. New laws may soon make you eligible to file a Camp Lejeune claim.

Camp Lejeune water veterans benefits have been available through the VA for some time.

To get benefits, veterans and their family members must show that they:

While VA benefits have provided some relief to those affected, many feel it was not enough. Others have faced denials, locking them out of receiving the benefits they desperately need.

With new laws, veterans and their loved ones may be eligible for financial compensation, even if they were denied in the past or are currently receiving benefits.

Contact us now to discuss what legal options may now be available to you or your family.

If you or a loved one lived or worked at Camp Lejeune for at least 30 days between 1953 and 1987, the Camp Lejeune Justice Act may entitle you to financial compensation. Even if the exposure happened decades ago, it is not too late to pursue justice.

Contact the Camp Lejeune Claims Center now. We can connect you with qualified lawyers that have the experience and resources required to successfully file Camp Lejeune water contamination lawsuits.

Our Camp Lejeune attorneys don’t charge upfront or out-of-pocket fees – they only get paid if your case results in compensation. To learn more, get a free, no-obligation consultation.

Camp Lejeune water contamination was caused by two water-supply wells that collected contaminated groundwater and pumped it into the treatment plant that supplied water to the base.

When was Camp Lejeune water contaminated?

The water at Camp Lejeune was contaminated from 1953 through 1987.

What was in the Camp Lejeune water?

A federal public health agency called the Agency for Toxic Substances and Disease Registry (ATSDR) reported that Camp Lejeune’s water was contaminated with trichloroethylene (TCE), tetrachloroethylene (PCE), dichloroethylene (DCE), vinyl chloride, benzene, and other toxic substances, many of which are carcinogenic (cancer-causing).

How can I file a Camp Lejeune water contamination claim?